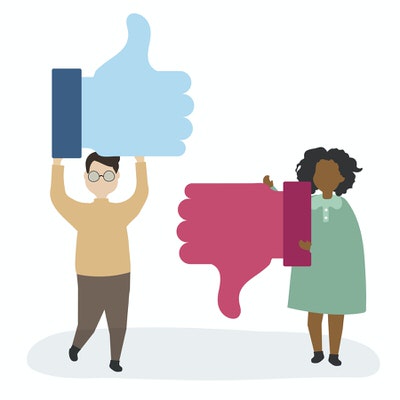 Headlines from an article are a great place to start. In a search of the allsides.com website for "Columbus Day" you can interpret the point of view of the Left, Center, and Right from the language used in the headlines alone. The headline "It’s Time for Italian Americans to Give Up on Columbus" presents a call to action with a clear position against Columbus from the Left. The headline "Happy Columbus Day — say it loud, say it proud" from the Right is clearly more celebratory and respectful. The headline from the Center, "Is it time for America to stop celebrating Columbus Day?" is presented as a question to be answered and does not present a point of view from the start.

Look closely at the words being used and consider if they are used to convey a negative or positive meaning or preference. You might also find clues in the language to see if someone is deliberately omitting information or providing information that actually supports the claim. The language might not be direct, so it might be helpful to think about how you would feel if a different word were used.

A generalization gives provides a conclusion based on patterns observed from specific cases. The article from the left provides an excellent example:

Despite this, many Americans of Italian descent still hold up Columbus as an Italian American idol

Evidence should be should directly and clearly be related to the claim it supports. Look for data, examples, analogies, or descriptions of experiences or observations. The author followed up his generalization about Americans of Italian descent and their thoughts about Columbus with three examples from prominent Italian figures or organizations.

In order for a generalization to usable, you need to make sure that it is logical and the observation or experiences is supported with sufficient evidence to support its accuracy. That evidence should also be accurate and adequately representative.

Rather than focusing on whether you agree or disagree with what is being said, it is important to look at if what is being presented is a fact or an opinion. The article from the New York Post shares the following fact:

Four times he would cross the Atlantic, most famously in 1492, with his trio of ships, the Niña, the Pinta and the Santa Maria.

You can easily verify that a fact is true or false, and there is ample evidence that the facts presented are as stated. Facts are useful for supporting your arguments and ideas.  An opinion provides a point-of-view with which you can agree or disagree. Opinions are useful for shaping your thoughts and opinions about a topic. In the article from the New York Post the following opinion is shared:

While it is certainly true that Columbus was better at getting to the New World than he was at governing it, his opening of Atlantic trade would change the world forever, arguably save the West and spread the Gospel of Jesus farther and wider than anybody in what then was known as Christendom could have imagined.

Regardless of your personal stance on the issue, the second quote likely made you think a little more than the first. It's important that you start being aware that if you agree with an opinion, you are less likely to have a strong reaction than you are to those you disagree with.

Evidence that supports ideas needs to be evaluated not only for its accuracy but also to determine if it is appropriate for supporting the claim. Evidence should be should directly and clearly be related to the claim it supports. Look for data, examples, analogies, or descriptions of experiences or observations. In the article from The Philadelphia Inquirer the following opinion is shared:

In the same way Germany does not have a national holiday or statues to memorialize Hitler because of his deplorable actions against humanity, Christopher Columbus should not be celebrated either.

The author uses the fact that Germany does not celebrate Hitler to argue that the United States should not celebrate Columbus. Do you think this evidence does a good job of lending support to the author's opinion?

Some people's opinions are more researched than others, and an expert's take on an issue is likely one to be more well-informed than your average journalist. Experts are likely to have written or worked extensively in the area that they are discussing, and their opinions are likely supported by multiple specific sources of information. A hypothesis is a proposal of one possible explanation meant to be argued with in order to eliminate all the other possible conclusions in order to arrive at the correct one. In this Slate interview, author Alan Mikhail presents this hypothesis:

What I’m hoping to do is to point out something else that’s crucial to [Christopher Columbus's] biography, and that’s right there in his own writings and in the understanding of his age: He was a crusader.

Alan Mikhail states very clearly that he believes Columbus should be portrayed as a Christian crusader. The author goes on to reference historical documentation and provide context to support this idea. As shown in this quote, he supports his argument without appealing to emotion:

I didn’t use the word Islamophobia in the book. That’s a very modern term; I would be hesitant to apply it to this period. Maybe something like “anti-Muslim sentiment,” which, to be fair, is clunkier.

According to the article, Alan Mikhail is the author of the book God’s Shadow: Sultan Selim, His Ottoman Empire, and the Making of the Modern World. A simple google search shows that he is a professor of history at Yale, and has written several books on Middle Eastern history. The article explains how his research about the Ottoman Empire connects to Christopher Columbus.