2nd: From Disease to Pandemic

Understanding How Diseases Spread (from The Vaccine Makers Project)

Infectious diseases spread in a variety of ways. When we know how infections spread, we can better control them. Infectious agents can spread directly from one person to another or indirectly when one person comes into contact with an infectious agent introduced into the environment by an infected person, such as on a surface or an item. And, in some cases, infections are not spread by people, but rather by infected animals or insects or via contaminated water or soil.
Person-to-person spread typically occurs when someone is exposed to an infectious person or products from their bodies, such as through droplets in the air (for example, from coughing, sneezing or even talking), through blood or body fluids (such as urine, saliva, breastmilk, semen, or vaginal secretions), through contact with skin or mucous membranes (such as mouth, respiratory tract, eyes, broken skin or genitals), or through feces. In some cases, the infected person’s bodily fluids or products remain viable inanimate objects long enough to infect the next person who comes along. We often think about toys or diapers in daycare settings, but this can include contaminated food that is consumed uncooked; blood on a towel, washcloth, or gym floor; desks or tables that have not been cleaned between occupants; or shared water bottles. Infections can also spread from a mother to her unborn child either while in utero or during the birth process. 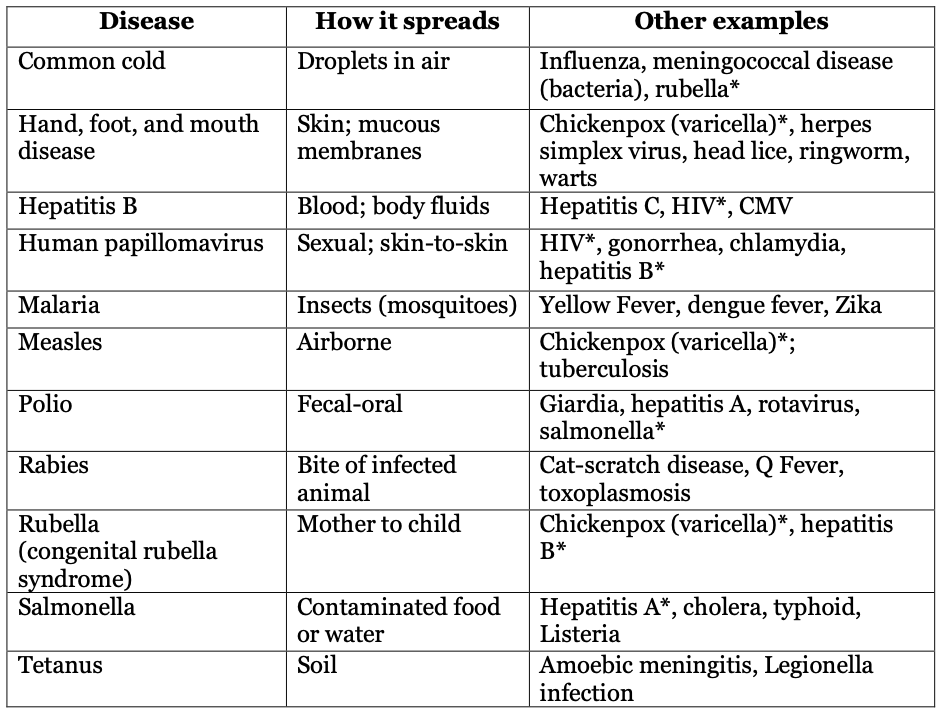 Choose one of the above diseases and do further research to find out who is most at risk of getting the disease.

Discuss whether the way the disease spreads is related to the people who are at risk.

Prepare a resource to educate at least one group of high-risk individuals on how to avoid infection. (i.e. what should an at-risk person do?)

Case Study: The 1918 Influenza Pandemic – Factors Beyond the Biological that Influence the Spread of Disease

Every year, people get an influenza vaccine. The vaccine is given annually because scientists have not figured out how to make a version that provides long-term protection. Part of the difficulty is that influenza virus changes. The changes cause antibodies previously made by our immune system to be less efficient at recognizing the virus. You can think of it as a Halloween costume. Depending on how good your costume is, more or fewer of your friends may know it is you. In the case of influenza virus, the more it changes, the more people's immune systems won't recognize it. Most often, the virus accumulates a series of small changes causing annual epidemics. But sometimes, the changes are dramatic. The result is that almost everyone is a target for infection. This is when we experience a worldwide epidemic or pandemic.

The 1918 influenza pandemic is considered the worst in history. It is estimated that about one of every three people in the world was infected and 50 to 100 million people died. The 1918 pandemic has been studied extensively to try to learn as much as we can about the virus that caused so many deaths. Interestingly, the virus changed even during the course of the pandemic. Scientists describe three waves during the pandemic. Each had its own unique characteristics.

The first wave of the pandemic likely began in the United States during the spring of 1918. During this first wave, tens of thousands of people in the U.S. became ill as the virus quickly spread. But, most recovered.

Wave two started late in the summer and lasted through the fall of 1918. This second wave was the deadliest of the three. Sometime during the summer, the virus changed in a way that made it much more dangerous. People infected during the second wave developed severe symptoms, often turning blue because of lack of oxygen. Many died within hours. The virus was particularly deadly when it infected previously healthy, young adults. Many nurses, doctors, pregnant women, and soldiers died during this wave. Sadly, so many people were dying so quickly during this wave that there were not enough coffins or resources to take the bodies of the dead away. The bodies were piled in makeshift morgues.

January 1919 is considered the start of wave three. Although the virus was not as deadly as it was during the second wave, it was still more deadly than during wave one. The third wave lasted throughout the spring. As the spring turned into summer, the pandemic subsided. The influenza virus that had caused so much death and destruction did not go away, but it had less impact. Two things led to the end of the viral rampage. First, so many people had been infected, that those who survived were mostly immune. Second, the virus changed again, and the new changes weakened the virus, rendering it less capable of causing severe disease.

After reading the passage, answer the questions below.

1. Why is the influenza vaccine given every year?

2. What causes an influenza pandemic?

3. How many waves did the 1918 pandemic have and how did the waves differ?

4. List and describe one or two additional facts that you learned from the reading.

You are now in charge of protecting your city.  Using the infection models you just watched design a plan to protect people.

You can assume: You have enough tests to find out who is sick as soon as they show symptoms.

You have the ability to shut down anything you want and impose curfews.

You have a limited amount of hospital beds, enough for about 1% of your population.