This web site is designed to look  legitimate, and incorporates some facts into its stories, but the articles are false. They are an attempt to convince readers to pass the news on as if it were true. These fake news sites get revenue from the ads you see on the page.

Satire websites are not really "fake news". These sites that may be topical, but the stories are not real. They are meant to be humorous, not to deceive the reader.

These websites also have bits of true stories but insinuate and make up other details to create an emotional response, typically anger or fear. Most of these are conspiratorial in nature, are very unreliable, and frequently shared on social media.  The stories often feature outrageous headlines in all capital letters.

The Seven Commandments of Fake News

"Alternative facts" - According to the Merriam-Webster Dictionary, “a fact is a piece of information presented as having objective reality," and alternative means “offering or expressing a choice.” Putting these two words together is problematic because of the implication that there can be multiple “objective realities” from which people can choose instead of just one, true reality.

Bias - "A preference or an inclination, especially one that inhibits impartial judgment."

Clickbait - "(On the Internet) content whose main purpose is to attract attention and encourage visitors to click on a link to a particular web page."

Confirmation bias - "The tendency to seek and interpret information that confirms existing beliefs."

Conspiracy theories - "Conspiracy theories are sets of often erroneous beliefs that people use to explain malevolent and/ or unlawful acts that are perceived to be directed by and in favor of a small and powerful group that works in secret against a larger group of unwitting victims."

Disinformation - "False information that is intended to mislead, especially propaganda issued by a government organization to a rival power or the media."

Echo chamber - "Mainstreaming ideological effect in which a group worldview is reinforced through continual circulation amongst like-minded people."

"Fake News" - "News articles that are intentionally and verifiably false, and could mislead readers...our definition includes intentionally fabricated news articles...it also includes many articles that originate on satirical websites but could be misunderstood as factual, especially when viewed in isolation on Twitter or Facebook feeds."

Filter bubble - "Phenomenon whereby the ideological perspectives of internet users are reinforced as a result of the selective algorithmic tailoring of search engine results to individual users."

Misinformation - "The dissemination of false information, either knowing it to be false (see disinformation), or unknowingly".

Parody - "Consists of mocking a style of literary production through an exaggerated imitation."

Post-truth - "Relating to or denoting circumstances in which objective facts are less influential in shaping public opinion than appeals to emotion and personal belief."

Satire - The use of humor, irony, and exaggeration to ridicule a subject, often a politician. 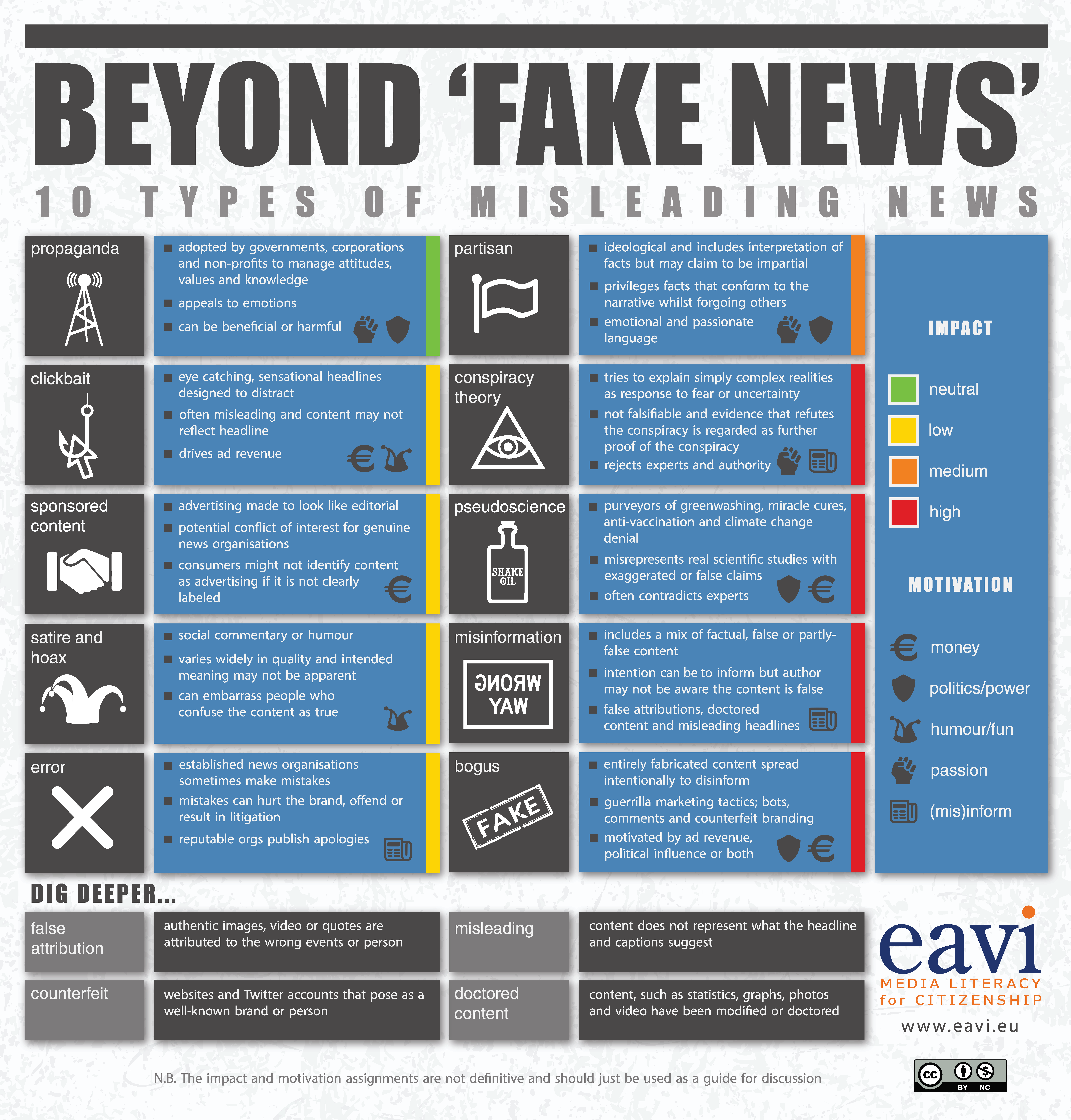